Company or Sales: Who Should Really Own the Client Relationship?

Over my last two decades in the banking industry, I have frequently witnessed discussions about who should manage the relationship with a… 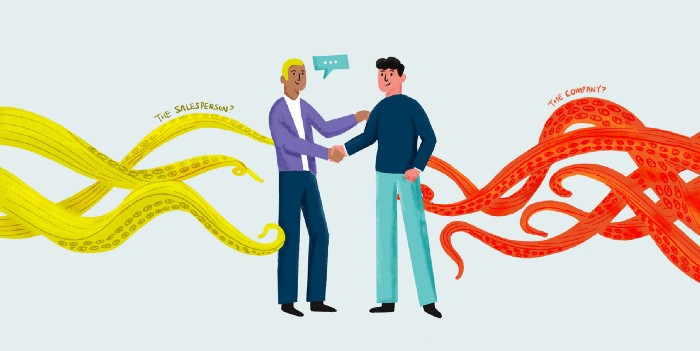 Over my last two decades in the banking industry, I have frequently witnessed discussions about who should manage the relationship with a specific client, and how. It was definitely a question of ownership (“this is MY client”) and it was sometimes leading to multi-dimensional quarrels: both horizontally (between the various contenders claiming “I have the relationship with Mr X” or “I introduced the client to the company.”) and vertically (with a definitive “The client belongs to the company.” from the manager).

This is a crucial debate especially in times where modern day social interaction through LinkedIn or personal messaging apps is moving professional relationships away from the companies’ systems. Who owns the relationship ?

At Weavit, we believe we can create better personal and enterprise tools to resolve the issue of “ownership” by creating a win-win situation between the company and its business developers.

1. The relationship can only be owned by a person.

Of course the foundation layer of any business is human interaction: just think about the origin of the words “company” or “corporation”. The relationships that are developed and carefully nurtured over time are an essential asset of any company, and are profoundly human to human.

This might sound like a “Salesperson” or a “Business Developer” topic. But the reality is that relationships are not only for salespersons: I would even tend to think that in any company, you are selling something whatever your role is. Everyone is a Salesperson. CEOs are selling their company to shareholders as much as to clients or potential partners, CFOs are selling their accounts to auditors, and production experts can be very secretive about the relationship they have with suppliers. You might want, as an HR or legal person to work more specifically with this head hunter or that lawyer because you have a long established relationship where trust has been built. And this relationship will follow you should you change ship.

Everyone is a Salesperson.

The versatility of relationships is also what makes business interesting and can make a real difference when well understood. I have seen a client of the company that within 15 years turned into a salesperson, then into a colleague and finally into an investor in Weavit. This long term relationship came obviously as a strong asset for us, and when thinking about it there is no doubt that I would call them MY relationship.

Nurturing these relationships should be encouraged by any company. Robert Cialdini showed that building rapport has been proven as a strong business facilitator as it creates trust. This is what makes the best Salesperson — and remember: everyone is a Salesperson -, but also creates a great threat to a company. Yes the relationship belongs to the parties involved, there is no way around it, so when an employee leaves the company, they will of course leave with their part of the relationship.

So why are there some conflicts and discussions about WHO owns the relationship ? Money is generally the immediate (and not subtle) reaction:

However, I believe that a more profound reason lies in the relationship itself, with a strong need to control what is going on. This possessive behaviour is also observed when money is not at stake.

These protective trends are very natural but they are threatening the businesses. On top of putting the company at risk of losing relationships when employees are leaving, there are several other factors that will eventually hinder the business:

Only 10% of business interactions end up making it in the company’s system.

3. Transitioning from individual relationships to institutional Clients (with a capital C)

So how do we solve the conundrum?

From my observation, the strongest clients we had were those that were “institutionalised”: in practice this meant that multiple persons at the Client were covered by multiple people from the company, in a coordinated way. The coverage was both vertical through the hierarchy but also lateral across the various teams that might have a say in the process.

This approach created something special almost akin to « consciousness » between the client and us: their name was more often mentioned than others and it was very likely the same on their end. These clients were very unlikely to leave if one of their contact points left us, and they were also more loyal than less institutionalised clients.

But this approach doesn’t come naturally for all the reasons mentioned above. Getting business people to that level of trust with their company requires several steps (and some time):

In closing: We believe that in a company, everyone is a Salesperson and everyone owns a strong network of relationships. Leveraging this network and building trust amongst your salespersons so that they open up their relationship more willingly is the best way to institutionalise clients. This creates more recurring business and reduces the risk of losing valuable clients when employees leave the company.

At Weavit, we are here to help companies understand better their clients through collective intelligence. We build intuitive tools with the users’ needs front and center, designed to build trust and unlock the power of your network.